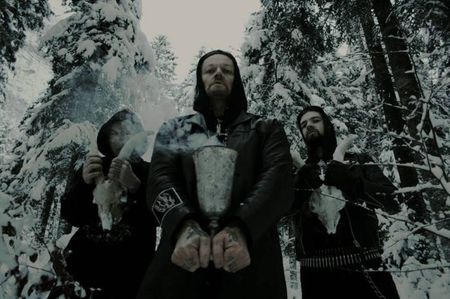 The dark days of autumn and winter are approaching as European troop BELPHEGOR plant another signpost to Hell upon the Earth's surface. One of the most consistently extreme bands on the Death/Black scene crest their throne built of bones once again to uncompromisingly attack humanity, three years after their 2014 demonstration of brutality, »Conjuring The Dead«. »Totenritual« consists of nine compositions which, blow-by-blow, silence any doubts about the supremacy of these icons of the European scene. Merciless riff force, crunchy blasts in a dark setting – 24 years after their foundation, BELPHEGOR’s inventive creativity places them head and shoulders above the rest. Anyone looking for silence, beautiful melodies and a life-affirming aura will suffocate under the power of »Totenritual.«

1. Let’s start talking about your new album »Totenritual«, you 11th studio album. For all the people who haven’t listened to it yet, what can they expect? What makes the difference for you in this new material from the old one?

It's BELPHEGOR to the bone with a lineup stronger than ever before and much lower-tuned guitars.  Well, I don't like comparisons because our goals aim toward natural development through our signature sound.  We've tuned our guitars down to B and A#, which is way lower than we've ever done before. It opened a new world to my guitar shredding and we experimented a lot and tried new arrangements, which you can hear in „EMBRACING  A STAR“ or „APOPHIS – BLACK DRAGON“. Exalted tracks like „BAPHOMET“, „SWINEFEVER – REGENT OF PIGS“ and„THE DEVIL´S SON“ represent BELPHEGOR anno 2017.

TOTENRITUAL is a relentless beast of dissonant riffs, blasts, and grunts with a very ritualistic vibe that leads throughout all nine compositions. We try to elevate our sound and our skills to the next level with each record, this time I can say we absolutely achieved our goals and all aspects are more dynamic and intense than on the last offerings. 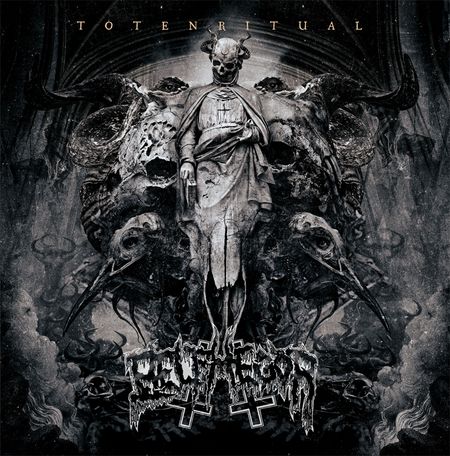 2. Tell us about the writing and composing of the album.

When we start a project, we get into the mood for intense practicing, especially before we enter the studio to be well-prepared. I don't want to practice in the studio or waste time that should be used for the creative process. Of course, prior to recording, we practice songs in the rehearsal room all together as a band, the way it's meant to be, I want to feel the vibe when it all becomes fleshed out. It felt great to write "TOTENRITUAL". The mood all was great, everyone welcomed the challenge and had been very passionate about it. I don't think I've ever been so proud of any other BELPHEGOR LP before.

All of us vastly improved with this album, and I think you can hear it. Every element was created from scratch in our rehearsal bunker. I also played way more guitar leads on this album, which also raised the dynamics in my opinion. It was amazing, we really got into the process and welcomed the challenge to track our heaviest LP.

3. You recorded it in Stage One Studios in Germany and Studio Mischmaschine in Austria, tell us about the recording process.

We recorded with Andy Classen at Stage One Studios in Germany to track bass guitar and drums. The guitars and vocals got tracked in Austria at Studio Mischmaschine with Jakob Klingsbigl. Jason Suecof and Mark Lews forged an aggressive sound wall in Audiohammer studios and mixed and mastered „TOTENRITUAL“ [Florida/ Usa]. This was the first time we recorded in multiple studios. It was an interesting decision and we could grow further and enter new levels of extremities and darkness.

4. Talking about starting Belphegor in 1993, next year is your 25th anniversary! Any special plan to celebrate?

It's unreal when I think back on all the sacrifices we had to make. The first ten or so years we just fought and struggled, often no money for food, we had to sell everything, including collections of LP's just to pay a studio and for the instruments, or to rent rehearsal rooms which we were always kicked out of because there had been a lot excess going on back in day. We got trashed all the time and tried to be the most extreme band on this planet. We were a complete mess back then. Sure there have been times, where I thought, fukk it's all going wrong, and the path we walked often was rough, but we never took the easy road.  That is why I am more than proud of what we have achieved, and the journey isn’t over yet. There was no manager or a marketing tool, we always decided for ourselves and marched our own path in our own circle, and continue to do so.

Next year we will be celebrating 25 years of blasphemy and perversion. and we've planned to offer out first three full-length albums, „THE LAST SUPPER“ [1995], „BLUSABBATH“ [1997], NECRODAEMON - TERRORSATHAN“ [2000], with all the original artwork on a specially priced CD because it isn't easy to find those anymore. We think of it like a present to our supporters. We will release it through „Season Of Mist“ mid-2018.

5. How is working with one of the biggest Metal Labels like Nuclear Blast?

Nuclear Blast is a solid label and supports us well. I don't particularly like talking about the industry and business end of things that much. We do what we can do best, create brutal and obscure musick for people that support us because they are the reason why we are still allowed to march in worldwide. Bands like BELPHEGOR are always a low priority in the industry anyway, so we do all we can to survive. Artists that don't suffer or kinda addicted, nor live their life on edge of society, cant' create darkness. Artists, in general, need to suffer and stay hermetical against all influences from institutions and sheep mentality. I don't kneel down, crawl or pray to any god. We are enemies to the cross and antigod – antilife.

6. The next headlining European Tour starts September 28th, what can your fans expect as set-list? Of course you’re presenting your new album, but will you mix old and new stuff or focus on your most recent albums?

From the new LP, we've added: "SWINEFEVER – REGENT OF PIGS“, „BAPHOMET“, „TOTENKULT – EXEGESIS OF DETERIORATION“, „THE DEVIL´S SON“ and „TOTENBESCHWÖRER“ to the main set. Yes, after 11 LP´s it's not so easy anymore to sort the tracklist out, but we try to please ourselves first and go for the faster tracks in a live situation to keep it intense, that's what our rituals are all about, to leave your body spiritually for one hour, get possessed and enter a different realm.

We aren't about groove and other bullshit, we are representing a hell-blasting Death/ Black commando, one of the most extreme bands on this planet, and that's the essence of BELPHEGOR, to go on stage, plug in and crush the holy spirit with our evil-incarnated sound walls. That's how we roll.

7. And around 2 weeks after Europe you fly to USA, which is the biggest difference (if you think there is any) between Europe and the States?

Yes, we can't wait to premiere several songs from “TOTENRITUAL” on stage. I don’t see that much variation,  there are loyal Metal supporters everywhere. I don't think it has anything to do with location.  It doesn't matter where we play as long as people are into it. I don’t care about how many people are standing in front of the stage. It doesn't matter if we play in a sweaty small club for 100 people or an open air for 20,000 people, we will crush any size crowd into hell. The goal is always to try to give our best and celebrate an outstanding ritual with the audience, where everyone, audience, and musicians, brings forth forces from another realm stemming from the musick and the grim, vicious atmosphere. We've played so many Rituals, traveled to magickal places worldwide and it's great. North America is very special to us, and we always enjoy the experience of flying over to this continent and performing our bizarre ceremonies across the states and beyond.

8. You’re a Black/Death Metal band. It’s interesting that the biggest line-up changes happen in Black metal bands, talking about you too. Why do you think that is happening more often in this metal style?

I can't say I keep up with what anyone else is doing. I don't think it's important and find it uninteresting. The number of people in the band is not what matters, the core is in charge and for live performances, we recruit an experienced second guitarist. The thing is, we demand a lot and need to be sure the musicians we bring into the lineup are creative, take responsibility and practice consistently and show dedication. I always stress that we make an effort to always improve our skills for live rituals.

There were so many highlights and unforgettable performances that I, and hopefully the audience, will never forget. The sort of excessive suicidal lifestyle I had lived and breathed for almost 20 years was definitely exciting. I could fill a few books here with insane stories.

Well, recently we played for the first time in India, China, Indonesia, Philippines and South Africa which was beyond amazing.  We always enjoy marching into new territories, welcoming the excitement of a challenge.

A BELPHEGOR concert is a Ritual nowadays, where you let your demons out to dance. When you get to see a BELPHEGOR live ceremony, you will experience what I’m talking about. BELPHEGOR is the blood in my veins and a live performance is the true example of that.

We will return to North America for our 11th tour, with support from Cryptopsy and Hate, 6th November the trek kick off in New York and end in Quebeck 9th December. This will be another great raid through the States. We also give each Ritual a local act the chance to participate and become a part of one of the most brutal packages that will march into North America 2017. We will soon announce the final 11 cities on this raid.

Thank you, Static Age, for this feature. I also want to say hail to the people who listen to our records, pick up merch at the shows, and all who attend BELPHEGOR live cremations. See you all on the road in North America again soon! Hail Death! Hail Magick!